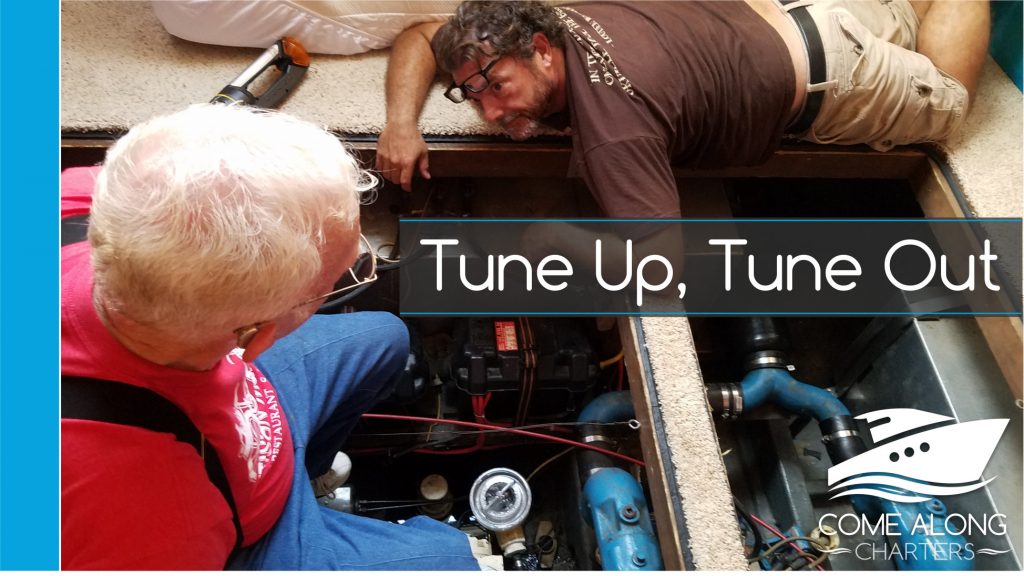 When we return to the slip, we examine the boat’s architectural drawings. Sure enough, they show a gas capacity of 360. Now Prime Time was modified from the prints we have; the original layout had a second head off the salon and the back of the boat had a sliding patio door walkout to a great outdoor seating area. This design was changed to include a wall and door to create an owner’s stateroom. Besides that, the underside layout with everything below seemed like it should be the same. But it’s not. Dad and Sean  measure the fuel tank and it’s 60x18x38 for a total cubic inches 31,040 (length x height x width) which when converted to gallons works out to about 177 gallons with an estimated 175 capacity with only 167 usable gallons (because you don’t draw completely from the bottom.) In the meantime, the docker with us on the sea trial knocked on the door with a copy of the original ad for our boat indicating a 200 gallon capacity. That was what was in the contract but the owner told us the day after we looked at it that he had been wrong (after looking at the blueprint) and it was 370 instead. Of course that was the number we had relied on as part of our decision making process: Big tank = longer range. In hindsight, we should have gotten down there and measured the tank. But hindsight gains you nothing and this is now a serious issue.

Sean is estimating a conservative fuel burn rate of 8 gallons per hour at 1500 RPM. We have a cruising speed of 11 mph (4 mph with the current + 7 mph with propulsion). The distance from Omaha (mm 627.4) to Cooper’s Landing (mm 170), the only known fuel stop between here and St. Louis, is 457 miles away. That means it will take about 333 gallons of gas to get there. So that puts us short. By a lot.

This also means we have to have an alternative. Based on those calculations we have to pick up gas somewhere around St. Joseph, MO (mm 443.9). But we already know there are no marinas, no services, no fuel on the water. Earlier in the day we met a German guy who’s been paddling the Missouri from the headwaters in Montana in his homemade (and very beautiful) canoe on his way to the Gulf of Mexico. He tells me there’s a yacht club around St. Joe that has fuel and shows me the pages in his 2005 guide. This gives me a little hope and I find the place on Facebook and send a message to confirm. Another alternative is to have a truck meet us somewhere. Or we carry more in portable fuel bladders.  We’re just not sure, at this point, what the answer is. But one thing we know is we sure can’t leave without a plan in place and risk running out of gas somewhere along the way.

After a quick taco dinner we pile into the van and go on a quest for more gas cans and to get to the Sprint store before it closes. We need to get the iPad onto the cell plan so we can finish downloading the maps from SEAIQ so we have a workable navigation center on board. Unfortunately, we strike out on all accounts and it’s well after 9 before we get back on board. The iPad we have does not have a GPS receiver and Walmart doesn’t have anymore gas cans. Dad and Sean still want to get down into the engine compartment now that it’s cooled to see what they can see. So we dismantle the bed (which works like a charm, easy peasy) and I pour a glass of wine since there’s nothing I can do. He looked at the ignition system and found some major condition issues with the distributor, distributor cap and points. He found the carburetor and backfire flame arrestor were black indicating issues with the port engine.

The owner had assured us, and Swamp confirmed, that a full tune up had been done around 2 years ago, and no more than 10 hours had been put on the engine since. So we were all surprised to see the plugs, caps, rotors and points in such bad shape. We also noted a benefit to upgrading the conventional ignition system to an electronic ignition that will increase fuel efficiency, improve performance and is essentially maintenance free.

Dad and Sean were of the opinion a full tune up was essential prior to undertaking our journey. That meant changing all the filters, spark plugs, ignition system, oil, checking the belts and hoses, adjusting the carburetor, checking and adjusting the engine timing and make certain everything was tight with no leaks or anomalies. Times two, since there’s two engines, of course. Swamp had already replaced the water pumps and impellers, another important part to making her sea ready. Unfortunately, we thought he had given a once over to the other systems, as well. Unfortunately we were all relying on the same information. Fortunately, with dad along, we caught it before it left us dead on the water. We decided we’d be at NAPA at 8 am the next morning when they opened, to get the replacement parts not already in the boat inventory, and get on it first thing. We put the bed back together and we all called it a night.

It took them until almost noon to get back to the boat after running pretty much all over Omaha to get what they needed, both parts as well as tools to put on the parts. I spent my time trying to do research on fueling options and getting the boat tidy. Once they got all situated in the engine compartment, dad went about changing the plugs. After pulling the first one he showed us the wear and why it needed replaced. They got through the first 4 on the starboard side and then were stymied. One of the plugs would not come out of the cylinder head. Uh oh. Dad explained this problem happens from carbon buildup in the cylinder head and it may be an expensive endeavor to fix.

Doing nothing and leaving the plug in is not an option for long term engine use.  My mechanic installed a “Heli-Coil insert in our Honda, did it with the engine head still on and in place using grease to collect any filings plus a vacuum nozzle.  It has been in place for about 85.000 miles.  The SB engine plug has 2 problems:  1.  The threads are burred and needs to be clean with a thread tap coated with grease–something we could have done.  2.  The smooth surface area where the plug tightens up against the engine head showed visible rust, which means a new plug would not seat or seal and the surface has to be repaired.  It could just be a light surface coating of rust and come off easy.  Or it could be deeper corrosion which will need to either lapped (polished) with a diamond compound or the head removed and the surface machined or a Heli-Coil installed.  If there is a crack in the engine head at this location, it most likely will need to be replaced.  That could be either a refurbished used engine head or a new one.  There is nothing wrong with a properly prepared refurbished engine head.  It is important to identify the source of the water that caused the rust. If it is a pin hole or crack, most likely the engine head will need to be replaced including all the gaskets etc.It was at this point we decided to cease all work and call in the guns. We’ll turn it over to Swamp to evaluate with a compression test and let us know just how bad (or good?) it is. Deflated we have nothing else to do but hurry up and wait. We made a punch list (in no specific order) of what needs to be done: