A collection of resources we'll use in our travels...

Types of Aids to Navigation

The term “aids to navigation” encompasses a wide range of floating and fixed objects (fixed meaning attached to the bottom or shore), and consist primarily of:

Caution: Do not count on floating aids to always maintain their precise charted positions, or unerringly display their characteristics. The Coast Guard works constantly to keep aids on station and functioning properly, but obstacles to perfect performance are so great that complete reliability is impossible. Only use floating aids for use as a navigation fix when you cannot see a fixed point of reference.

Depending on where you boat in America, you may see several differences in how navigational marks are colored, numbered, or lighted. Regardless of the location, buoys and beacons are placed in very specific locations, to mark either a particular side of a waterway, or some other navigational feature. The primary system in use is referred to the “U.S. Aids to Navigation System”. The U. S. Coast Guard maintains this system in conformance to the International Association of Lighthouse Authorities (IALA), which is an international committee which seeks to ensure safe navigation, primarily through the use of common navigation aids and signals.

The “LATERAL” system is the familiar RED RIGHT RETURNING system, meaning that on all navigable waters returning from sea, the red even-numbered marks are on the starboard (right) side of the channel and the green odd-numbered marks are on the port (left) side of the channel. Numbers on the marks ascend when traveling from sea to harbor–if you don’t have a compass and become disoriented on the water, you will always know you are heading upstream if the buoy numbers get larger as you travel.

Port side numbered aids are green in color, odd numbered and may be lighted. Port side marks are located on the left side of the waterway as you travel upstream, and the buoy numbers will increase as you head upstream. (Chart depictions are shown next to the marks) Port-Side Buoys have a cylindrical above-water appearance, like a can or drum floating on its axis. Commonly referred to as “CAN” buoys. Beacons – Port side beacons have square marks attached to them, with two shades of color and a reflective border.

Starboard aids are red in color, evenly numbered and will be on your right side as you travel upstream. Buoy numbers increase as you head upstream, and may have a red light. Starboard-side buoys have an above-water appearance like that of a cylinder topped with a cone, pointed end up. The cone may come to a point or be slightly rounded. Commonly referred to as “NUN” buoys. Starboard-side Beacons have triangular marks attached to them, with two shades of color and a reflective border.

For the sea buoys that delineate channels off the coast of the United States, and for the Intracoastal Waterway (ICW), red is on the right (shore side) when proceeding clockwise around the U. S. from the East Coast to the Gulf Coast, or proceeding north along the West Coast.

ICW marks are further identified by a small yellow reflector at the bottom of the mark. The same port and starboard marks shown above will look like the following.

Numbers on the marks ascend when traveling in this direction. Where the IALA-B and ICW marks meet, one must be very careful to observe the change in meaning by referral to local charts.

These diamond shaped marks are used to help the vessel operator determine location on a nautical map. When you see a dayboard, and find the corresponding mark on the chart, you know your precise location. They may be lettered, and may be lighted with a white light. Their color reflects that of nearby lateral marks.

These marks are used to mark fairways, mid-channels, and offshore approach points. They have unobstructed water on all sides. These marks may be lettered, and may be lighted with a white light. They may also have a red top mark.

These indicate a danger which may be passed on all sides. They are erected on, or moored on or near danger. They should not be approached closely without special caution. They may be lighted, and they may be lettered. 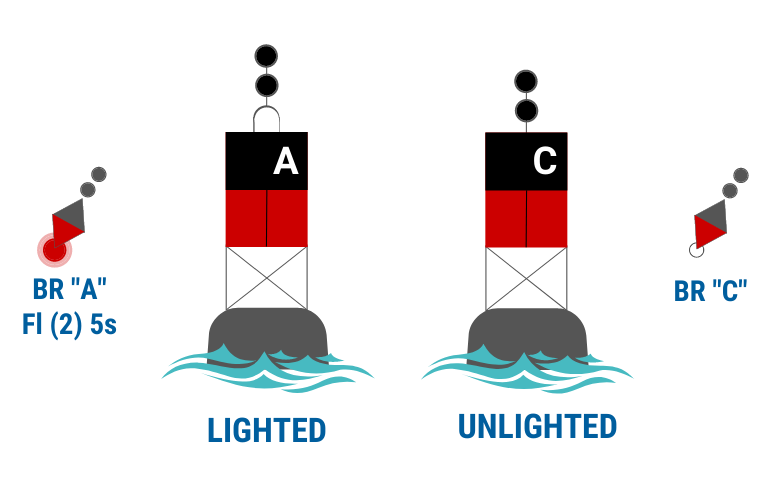 Special marks have no lateral significance (meaning they don’t tell you which side of the channel or river you may be on). These marks are used to mark a special feature or area. These include area limits for anchorages, fishing grounds, or dredging/spoil areas. These buoys may be lighted, and if they are it will be a fixed or flashing yellow light. Shape is optional, but usually follows the shape of the navigation buoys that it is positioned near.

Mooring buoys come in two different shapes; spherical and cylindrical. Both have white bodies with a solid blue horizontal band on the center of the buoy. Mooring buoys may have a white reflector, or a white light attached to them. Mooring buoys are the ONLY buoys to which you may legally tie your boat. Buoys are generally placed in marked anchorage areas, and you must take caution if you are traveling near buoy areas. Check your state boating guide for particular operating restrictions in anchorage areas. 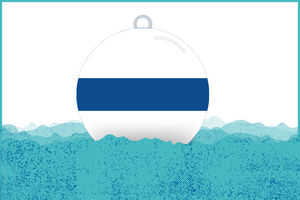 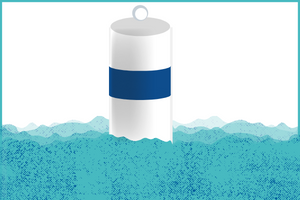 These are pairs of unlighted or lighted fixed aids that when observed in line show the pilot to be on the centerline of a channel. 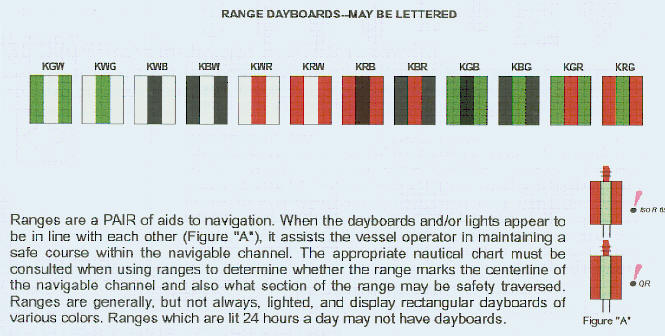 Regulatory Marks re designed to assist boaters by informing them of special restrictions or dangers that they are approaching. Regulatory marks are white “can” buoys that have an orange shape on them. The mark will give either a warning or instructions on how to proceed. The shape determines what type of mark it is.

This system was originally intended for use by states on lakes and inland waterways that weren’t covered by nautical charts. The buoys used in the Uniform State Waterway Marking System (USWMS) used colors, shapes and marking patterns that differed greatly from the U.S. Aids to Navigation System (ATONS).

In 1998, the U.S. Coast Guard decided to phase out the USWMS to avoid potential confusion of boaters and instead, favored using the more widely recognized ATONS. By 2003, the USWMS was completely phased out. Below are a few of the differences from the federal system you should know about.

Here’s a summary of the important changes regarding the phase out of USWMS:

The state system differs in several ways, in case you happen to encounter them. These aids also assist mariners in making a safe landfall, mark isolated dangers, enable pilots to follow channels, and provide a continuous chain of charted marks for precise piloting in coastal waters. The U.S. Aids to Navigation System is intended for use with nautical charts, which provide valuable information regarding water depths, hazards, and other features that you will not find in an atlas or road map.