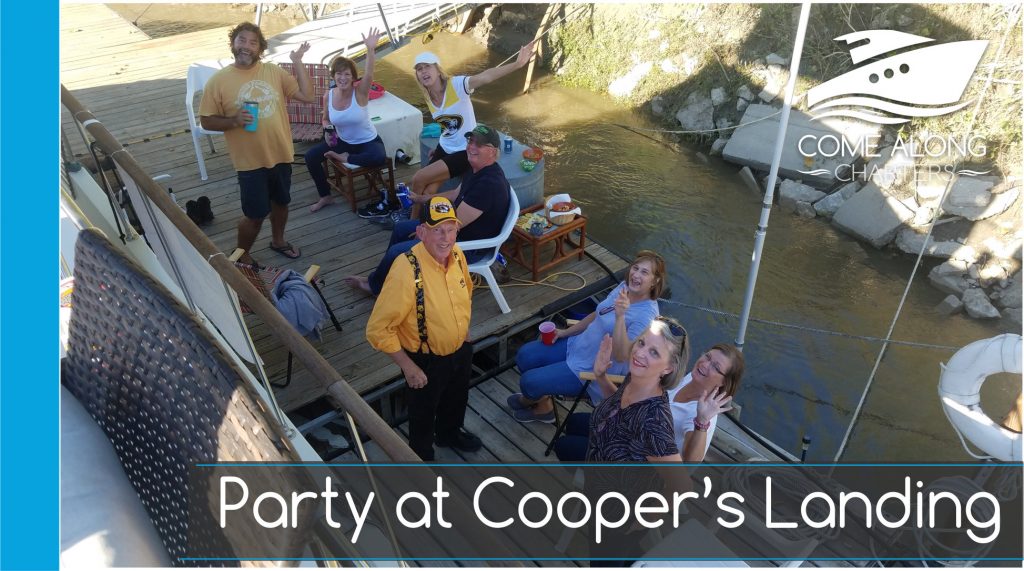 Jill & Sean have it from Omaha to Cooper’s Landing, which is near where they live in Jefferson City, Missouri. The boat is going to stay here a bit while some work gets done. But first, we’re going to celebrate!

The next day we head back down to the boat to get the shore power organized and get started on a thorough cleaning. A week of boat camping has her a big mess inside and out. I strip the beds and get all the laundry together and try to work on the big stain the ice water leaking from the cooler bags made on the galley carpet (and another reminder of how much I want that gone and wood in its place!). We find we have two cords and need both of them to make the run up to the 220 outlet behind the band stand. That means we only have half power on the boat as the circuits are split up to carry two loads. That’s ok, at least the air is running. At 4 pm dad’s mechanic, James, meets us and they head to the boat and we go to Camping World and the plumbing supply store in search of an elusive cone piece that has broken on the kitchen sink drain. James worked for dad as the sole vehicle mechanic when he was maintenance supervisor at Columbia Public Schools. Dad swears he’s the best when it comes to working on the ‘old stuff’ where you have to depend on your own brains and not that of a computer. When we meet up on the boat he already has it pulled and gives us the bad news that it is indeed, the pump and it will need to be replaced; the weld did not hold. The new impeller the Sea Jay guys put on still looked ok. He also gave us more news we didn’t want to hear.

That two electronic ignition switches we thought we had paid Swamp to install? They weren’t. And at this point we don’t even know if all the plugs had all been pulled and replaced, either. I mean he didn’t get the oil changed. And he obviously didn’t run the generator long enough to test to make sure it was working or he would have spied right off no water was ejecting and then seen the broken impeller. What a deflated feeling. We had specific work ordered, in a list and on paper, with both service providers in Omaha and neither were to our expectations and in fact, could have resulted in potentially dangerous repercussions. Just another very expensive lesson on how difficult it is to do business long distance, despite great recommendations. We decided then and there we could be mad, revengeful, furious, cry or just shake it off and move on. Otherwise this had the potential to send me down a path I mentally and physically could not afford to go down. I hear my mom’s voice in my head saying ‘you can’t cry over spilt milk’ and I know she’s right.

The restaurant was serving up delicious, fresh lightly breaded catfish with green beans, slaw and potato salad so we all had that for dinner as we enjoyed the evening breeze as the sun set. We went back to dad’s (the house was still rented) and crashed another night.

In the morning we had a lot to do and didn’t get down to the boat until after 12:30 pm. I had made a facebook event for friends and family to come see the boat anytime after 1 pm but hoped no one would actually be punctual. Sean got busy scrubbing the outside top to bottom, using a lot of elbow grease to get rid of the spills, bug splats and other stains that the boat accumulated over the past week. I worked inside wiping down walls, remaking beds and putting away laundry. About 2:30 our first guests arrived, bringing yummy snacks from the Amish store. I made bloody mary’s and we had our first toast as I gave them the nickel tour of the boat. Soon more friends began to show up and my sister, dad and brother, then my niece and 2 year old Kylie. Our friends with InSight Graphics came with the vinyl for the new logo and began the tough ask of taking off the 1980 sticker. They brought me my new Come Along Charters banner I hung from the rail and even threw in some cool vinyl tags and bumper stickers we can give away!

Everyone mixed and mingled, ate some good food and finally it was time for the boat christening. Sean and I went back and forth about changing the name. A lot. There’s so many thing, mostly superstitious, that need to be done with a change and we really didn’t come up with anything we liked better so we decided she would stay Prime Time. It just seems fitting and it’s grown on us. We toyed with something to honor my mom but she probably would have a lot to say about having a big boat named after her, anyway. We gathered everyone around, dad gave a brief blessing and I popped a bottle of champagne Jackie O style (too afraid to actually break it over the fiberglass) and everyone cheered. We picked a retro 1970’s font and the shading, with Sean’s suggestion, goes from sun to water with the elusive green flash on the horizon. One thing for sure It will make a cool design on a t-shirt!

With a manageable size group of 12, we decided we’d take her out for a sunset cruise. After life jackets were doled out, everyone settled into a place on the bridge and Sean pulled us out from the dock. It was a gorgeous night, pretty colors but the moon behind us stole the show. We took lots of pictures, had many laughs and everyone thoroughly enjoyed our maiden sunset cruise, hopefully the first of many. That night Sean and I stayed on the boat and sat up top listening to the final songs of the band, Fried Crawfish Daddys. After we went to sit by the other campers by the giant bon fire and chatted about the day. Soon we heard noise coming from up river and right after saw the bright lights. To our delight, in the middle of the river, in only moonlight conditions, a tug pushing nine barges made its way around the river bend. Its name was the Mary Sue and the old timers at Coopers knew her well. It was certainly something to see and we were just glad we weren’t out there coming the opposite way!

We went to bed that night with the river lapping at the hull, limbs and debris hitting, then bouncing off into the current. There was a cool breeze tinted with smoke from the fire and a camper down the way quietly strummed an acoustic guitar while the crickets played harmony. This is the life. This is what it’s all about. And I can’t wait to see what the next part of the adventure will bring.

Change is in the Air…