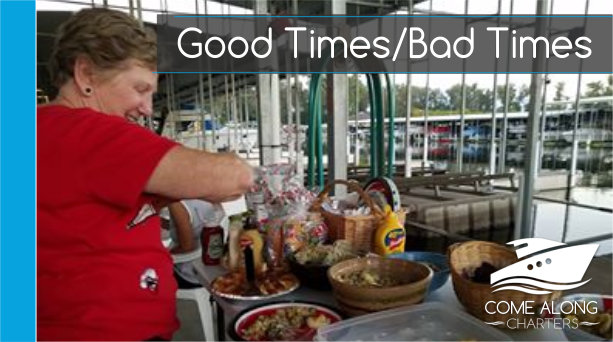 Or all’s well that ends well

We arrived at the marine a little after 11 pm on Friday. We’d gotten a late start, in part because the new buyer for our house came at 10 am to get a lesson on the pontoon boat and the home inspection took from 11 am to 2 pm. I popped out to Walmart to pick up the camping portable potty I ordered, a new unbreakable coffee pot and some last minute supplies and came back and fixed a massive bunch of dill potato salad and Helen’s pasta salad for the dock party on Saturday and some curry chicken salad for the river. When we finally got out the door, me driving our Honda Piolet packed to the brim with things we’ll be storing at Dad’s house, and Sean driving the rental packed floor to ceiling with things going to the boat, I realized about Ashland I had forgotten (again!) the hardware to put together the patio furniture for the deck. So, Sean had to turn around and go back to the house adding another forty-five minutes to the delays.

I got to dad’s and unloaded and started working on the new Apple IPAD Pro Sean had delivered there. He’s using this as his main navigation tool along with Navionics software. It has an independent GPS system so it doesn’t have to relay on internet, just satellite service. After Sean arrived we realized we had no choice but to unpack and repack the car completely, if we were to fit my new purchases. Since my dad, the consummate and ultimate puzzle packer, and brother Kurt had already left to go to my dad’s sister, Fara’s house for the Purdue/Mizzou football game, we were left on our own to figure it out. We also had a stop at Lucky’s meat market to pick up the brats for the party. We were lucky to fit another cooler into the already overflowing car! But finally on our way, we took turns driving so each of us could get a little work done.

When we got to the marina everything was quiet – no dockers out partying – so we filled our two shopping carts and tried not to make too much noise making our way to the end of F dock. The first thing we notice is the bimini is gone. Then it becomes clear the guy we hired to clean, wax and buff the boat and redo all the teak, isn’t finish (and barely looks started.) And THEN inside, we see it. Everywhere. On practically every surface. White fuzzy mold. And a little bit of black mold a couple of places. With the boat closed up tight for two weeks, the electricity being off/on at the marina and the massive amounts of rain, this was an unpleasant, though not entirely unexpected, surprise. We had this happen to us once before on the 38 to sailboat I first lived on in Key West, the Marisol. Exhausted we stop bringing things into the boat and break out the cleaning supplies. For two hours we use industrial Clorox wipes to wash down every surface on the boat. Then we still had to assemble the frame and bed (which we moved so Swamp could get to the engines) and bring everything from the carts inside. We crawled into bed a little before 3 am, set the alarm for 7 and Sean fell right off while I tossed and turned, annoyed with the carp pinging at the hull and the motion detector light going off and on, on and off at the electric security gate.

As sunlight began to flood the cabin with rays, the alarm rang, and it was time to get going. We still had more cleaning to do, lots of organizing and other chores to get done prior to the 10 am arrival of our guests. Needless to say it was a very busy morning but it was starting to come together. Sean picked up Mary Ann and John and brought them straight to the boat. They are a delightful couple from St. Louis, mid 70’s (our parent’s age) both young in heart, stamina and spirit. He owns a financial firm and she’s a professional volunteer with hospice and other worthy organizations, as well as vineyard owners (with their own wine), dog lovers, horse owners, Harley riders and outdoor enthusiasts. We already hit it off in our phone chat and we know it’s going to be a fun week ahead. They get familiar with the boat and ask to be put to work, which we gratefully oblige, as we wait of Eugene, the boat polisher, to show back up to finish his job.

After, we head into town to grab some lunch, buy some fresh bread and hit Wal-mart for provisions. Soon it’s time for them to go to mass and us to get ready for the big dock party. We cooked dozens of brats and set out yummy sides and John and Mary Ann broke out some of their delicious white wine. We enjoyed conversation and fellowship, fantastic food and a great send off for our trip. We’ve really come to appreciate and enjoy everyone on F Dock at NP Dodge Marina, but especially John and Margaret next door who have bent over backwards to be helpful and neighborly and are just good, kind-hearted people (even if they are corn huskers 😊). I even got to have a little ladies gab fest on the upper deck with my new furniture and mood lighting after the main party had died down. John and Mary Ann had a fabulous time but after a 4 am wakeup, turned in at 9 pm and I wasn’t far behind. After all, we’ve got a big, big day tomorrow! Ready or not, here we go!

Tune up, tune out