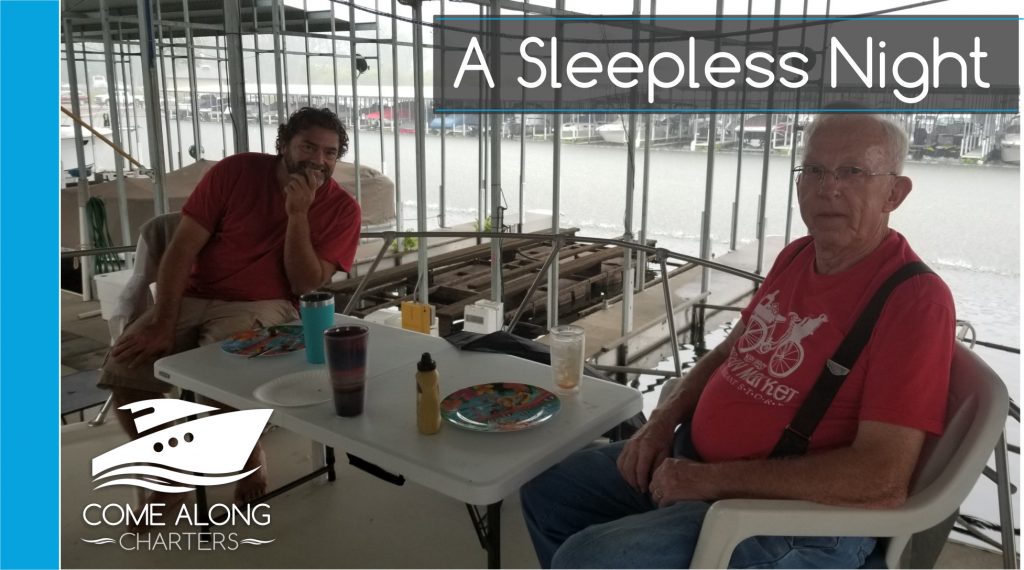 Wowzer. What a storm. It started raining about 9 am on Sunday morning it was still pouring when we loaded out Monday. The forecast predicted heavy thunderstorms all day and that, coupled with the necessary maintenance, meant we were not leaving as hoped. Or anytime this week since Sean had to get back to work. After testing out our new heat-resistant pad on the new bow table, we had a great dinner of BBQ chicken. Everyone else had left the docks for the weekend so it was nice and quiet, except for the continuous rain. Dad and I turned in fairly early, Sean about midnight. At 3:30 am we were awakened by intense movement of the boat being pushed directly on the stern by 20 mph winds and even higher gusts. Sean checked the forecast to learn it was going to get worse, and it was going to last.

We decided to get up and button down the hatches, rhetorically speaking. This mean going outside to see what all was banging and adjusting the lines holding the boat in place. Sean got all geared up in his foulies and headed out to the bow. I had the door open enough to grab the things he was handing me but rain was still coming in sideways – under the roof. It was crazy. He went around and readjusted all the lines to try to keep the boat from banging into the pilons.

Then he went to the flybridge to see about the Bimini. The last thing we wanted was for the storm to take the top off. He called me up to help and in seconds I was drenched head to toe. We decided there was too much wind to risk messing with it and it would be better to take our chances. When we got back inside I stepped into a big cushy puddle of wet on the carpet. The windows where the mid-deck meet the flybridge were pouring like a sieve. In checking the rest of the boat water was coming in from the galley hatch and the stateroom port aft windows. We did what we could to stymie the water but there wasn’t much to be done until things could dry out and be assessed.

Between the wind, rain, thunder and lightening along with the heavy rocking of the boat (in a covered slip!), it made for a sleepless night. We couldn’t believe that dad with his bunk below the waterline, could sleep through all the turmoil and commotion. On top of that, the grass carp were banging endlessly on the hull creating a hollow drum noise that added to the commotion. Finally about 6 am things settled down enough to drift in and out of sleep but at 8, I was awoken by a shrill, piercing alarm from my phone. It was a flash flood warning for our area. Duh!

Sean got up to see about Dad and he had just gotten up, himself. We were surprised he had slept in. But turns out he hadn’t; he’d been up most of the night himself. He told us he just didn’t see any reason to get up! As we cleaned up the boat and packed up to leave it was still raining like crazy, the sound resonating on the metal roof of the marina as it would blow one way with the wind and then dump like a waterfall as the wind receded. But despite the sleepless night we were just grateful. Different circumstances could have put us anchored out over night on the Missouri River in that 24 hour deluge. We were glad to be in the slip, in the marina.

Side Note: While at breakfast one of the other dockers phoned to let us know the marina was closing due to high water and that all electric and water would be shut down. We returned to clean out the fridge (still in the rain) and the water was already over the ramps in places. Later we learned the area got 7 inches of rain. The marina was closed to all access. It did not reopen until the following Thursday.

Tune up, tune out